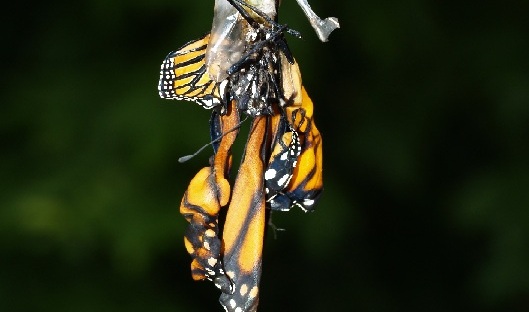 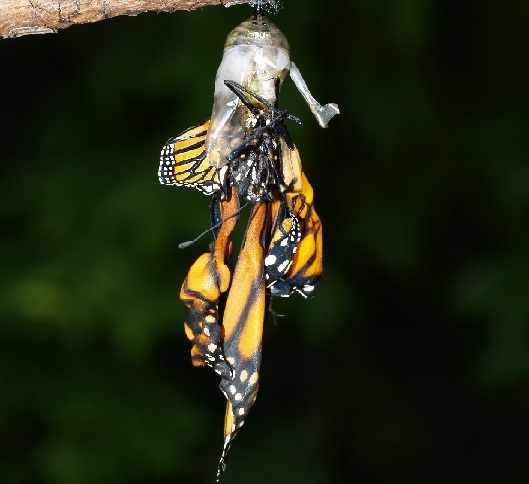 An infected monarch butterfly struggles to emerge from it's chrysalis

While humans may rely on mom’s chicken soup to fight off infection, mother monarch butterflies lay eggs on medicinal plants to protect their offspring from disease. According to a new study by Emory professor Jaap De Roode and his research team, female monarch butterflies that are infected with parasites lay eggs on anti-parasitic milkweed species to protect their newly hatched caterpillars  from infection.

Parasite spores on monarch wing scales, photographed under a microscope

Monarch butterflies often carry a protozoan parasite similar to malaria, which can have detrimental effects on butterfly development. Infected butterflies have difficulty emerging from their chrysalis, fly poorly, and die young. The parasite is transmitted between adults when mating, or from mother to offspring through the surface of  their eggs (caterpillars often eat their egg shells after hatching for extra nutrition). However, monarch caterpillars can fight infection by ingesting certain species of milkweeds that contain cardenolides, toxic steroids produced by plants.  The toxins prevent parasite spores from establishing in the caterpillar’s gut which can prevent infection, or at least reduce the number of parasites the caterpillar caries.  Cardenolides can cause side effects in healthy caterpillars, like a slightly shorter life span, but these risks are minor compared to the damage caused by infection.

DeRoode and his research team tested how monarchs use the plants to prevent infection both as caterpillars and as adults. They found that caterpillars were unable to detect the presence of parasites and could not distinguiqh between medicinal and ordinary species of milkweed. However, mother monarchs could tell the difference. Infected mothers laid the majority of their eggs on medicinal plants, while unifected mothers showed no preference.

Caterpillars of other species can self medicate, so why haven’t monarch caterpillars caught up with the trend? DeRoode thinks this is partly because the medicinal plants only prevent infection, but can’t cure the parasites once the caterpillar has caught them.  By the time a caterpillar is a few days old, it’s fate is already sealed.  It makes more sense for female butterflies to start caterpillars on a protective diet from the moment they hatch, even if there are some costs to early medication.  Also monarchs aren’t as mobile as some other caterpillar species and don’t stray far from the plant that they hatched on. Even if infected caterpillars could benefit from medicinal plants , it’s unlikely that they would venture off in search of treatment.  Species of caterpillars that successfully self-medicate are those that frequently switch plants and are infected by curable parasites.

If  you’d like to read the original paper, see the link below.  If you’re interested in learning more about monarchs and their diseases, or you want to get involved in monarch research, the Monarch Health project  is looking for volunteers to help track monarch pathogens.