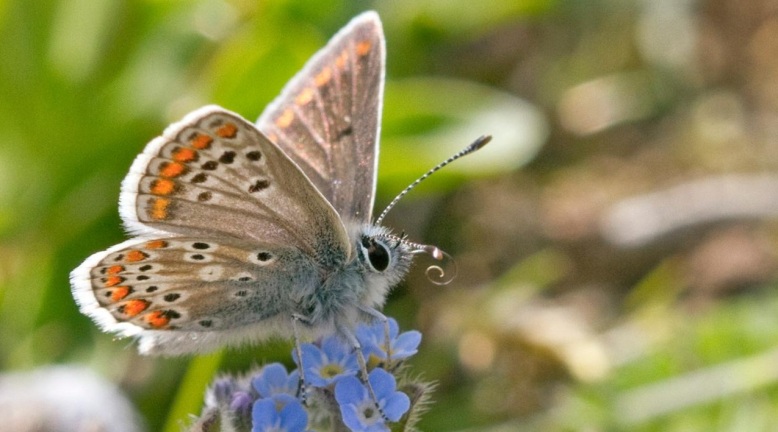 Climate change is reviving   a once rare British butterfly, according to a new article in the journal Science.   The brown argus butterfly was once scarce, but has doubled the size of its range in the last 20 years.   The study, authored by biologists at the University of York, indicates that at warmer temperatures brown argus butterflies are able to feed on more common plant species, allowing them to expand into new territory.

Brown argus caterpillars normally feed on the rockrose plant, but they occasionally use plants in the geranium family during warm summers. The rockrose usually lives on sunny, south facing slopes and brown argus caterpillars depended on these warm microclimates for survival. However, for the last 20 years summer temperatures have been on the rise and the brown argus has been shifting it’s egg laying towards geraniums.

During cold summers, the brown argus butterfly uses the rockrose plant (left) but climate warming has allowed it to thrive on the wild geranium (right)

To test whether climate caused the shift in food choice, lead author Rachel Pateman and her colleagues used data collected from 200 sampling sites in southern England.  Butterfly sightings at the sampling locations were reported by volunteer naturalists, and some sites  been monitored since the 1900s.   Each sampling location had only rockrose or only geranium growing nearby.  The researchers used butterfly counts from the volunteer records and matched it to historical temperature data. They found that the butterfly populations grew faster at geranium-only sites during warm periods, and faster at rockrose sites in cool years.

The scientists also looked at  changes in brown argus populations in the last 20 years, when temperatures have been especially warm.  They found that the brown argus had become  5.3 time more plentiful at geraniums sites, but that 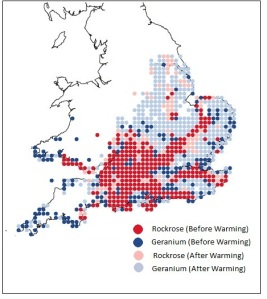 The brown argus has nearly doubled the size of its range in the last 20 years. Dark red and blue are locations where it was found prior to 1990, the light blue and pink circles indicate new territory gained in the past two decades. Most gains have been in areas where geraniums are found.

rockrose areas had not changed at all. The butterfly had also expanded it’s range north by 79 kilometers in just 20 years. Co-author Chris Thomas thinks that the common geranium plant may serve as a stepping stone, allowing the brown argus to branch out into new regions without having to fly long distances.  Says Thomas “Wild Geraniums are widespread in the landscape, the butterflies can now move from one patch of host plants to next and hence move rapidly through the landscape expanding their range generation after generation.”

While climate change has been an unexpected bonus for the brown argus, it’s unlikely to be such a boon for other species.  According to Stanford biologist Terry Root (who was not involved in the study), for every species that turns out to be a climate change “winner” there are expected to be three “loser” species that suffer population declines or go extinct.